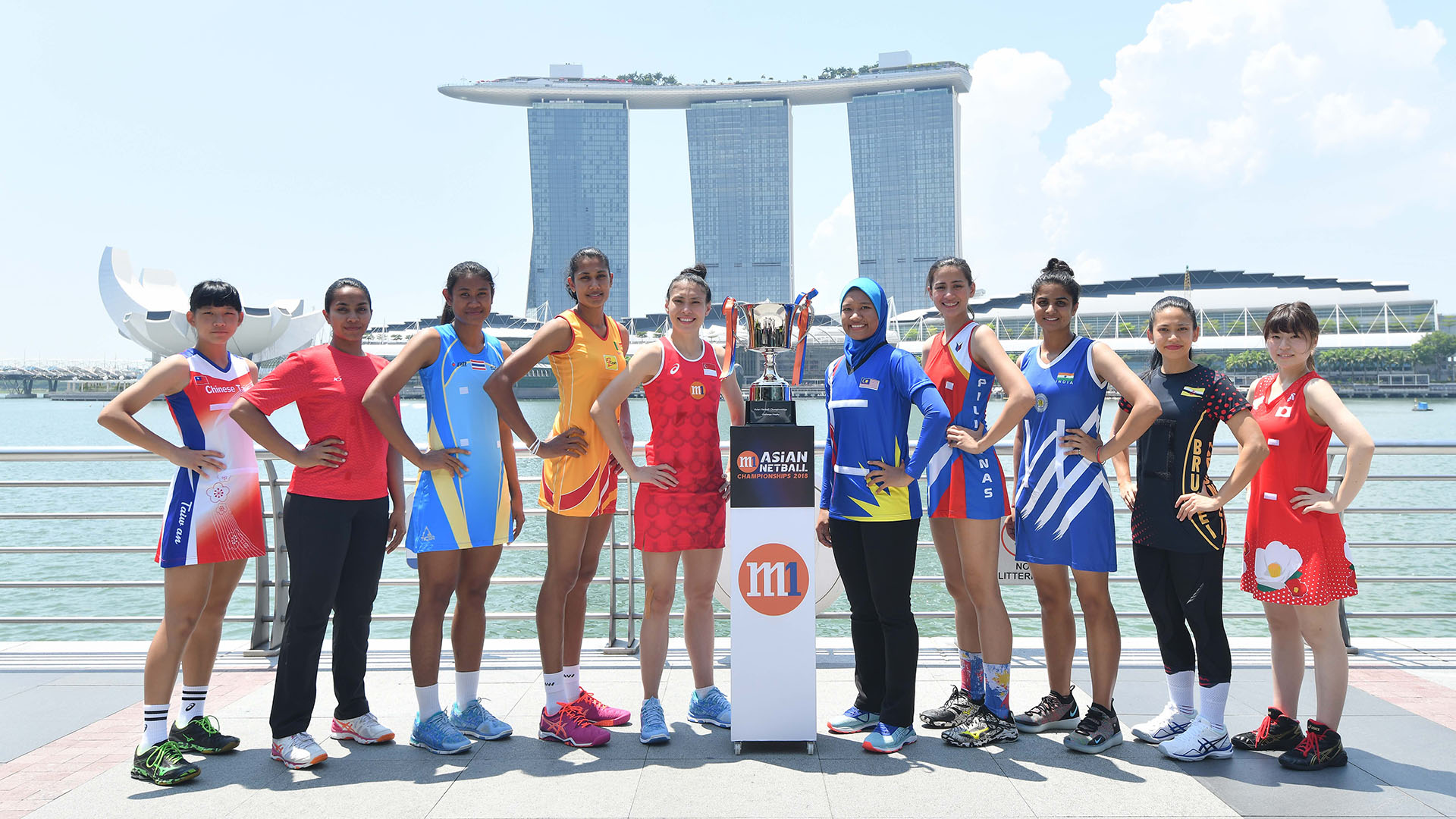 SINGAPORE, 2018, AUGUST 31 – The 11th edition of the M1 Asian Netball Championships (M1 ANC) commences tomorrow with all 12 nations competing in the tournament geared up and ready to take each other on at the Singapore Sports Hub from 1 – 9 September 2018.

The team captains from the various competing countries came together today for a glimpse of the elusive Asian Netball Championships trophy in front of the iconic Marina Bay Sands.

Captain of Team Singapore Vanessa Lee is expecting tough competition, and said: “For the upcoming M1 Asian Netball Championships, we’re expecting many close games as the Asian region is getting much stronger at netball. The scores are getting much closer, so we are definitely preparing for tight contests between all the teams.“

One of the teams to beat is Malaysia, with captain Nur Syafazliyana Mohd Ali also commenting on having the finals in sight: “We are aiming to defend our Asian Netball Championships title here, but most importantly, we’re hoping to at least make the finals at the tournament.”

Taking the participating nations to 12, captain Ana Thea Cenarosa from the Philippines remarked on competing in their maiden event: “We’re really excited about the M1 Asian Netball Championships but we’re also really nervous. Our mindset for the tournament is to give our best in everything, and this competition is important to us as we’ll need to do well to improve our ranking in order to have netball featured at the 2019 Southeast Asian Games in the Philippines.“

Team Singapore will take on Brunei in the first match on opening day at the M1 ANC at 1pm, followed by Malaysia against Japan, before Chinese Taipei contest Sri Lanka. The final game of the day will see Philippines battle it out against Thailand at 7pm.

Expect a week of scintillating netball from the Asian Nations including top trophy contenders Singapore and Malaysia – the defending champions of the Asian Netball Championships – and Sri Lanka – who have won the most number of Asian Netball Championship titles (4). Also participating in the tournament are Hong Kong, India, Japan, Maldives, Chinese-Taipei, Thailand, Pakistan, Philippines and Brunei.

For more information on the M1 ANC 2018, visit www.netball.org.sg and to purchase tickets, please visit bit.ly/M1ANC2018Tickets.