Bruno Junichi Suzuki Castanheira, or simply known as Bruno to the fans has had an impressive start to his career in Malaysia. He announced himself to the Malaysian football scene in style by netting a first-half hat trick against Sabah FA in his debut.

He continued his hot streak by going on to score in 2 more matches against PKNP and PDRM FA. After 10 league matches, Bruno has found the back of the net 9 times and provided 4 assists. He even won the Professional Footballers Association of Malaysia (PFAM) Player of the Month in Premier League for February 2017.

With his impactful start and dazzling form, it is no surprise that Bruno is quickly becoming one of the fan favourites.

The Jangs now sit at the top of the league table, 5 points clear of their closest opponents – PKNP and Terengganu FA.

Playmaker: What influenced your decision to join Negeri Sembilan FA?
Bruno: After my contract ended with FC Gifu, I received a phone call from my former head coach in Geylang International FC – Jörg Steinbrenner who happens to be the Technical Director of Negeri Sembilan FA. He told me that the management has seen my video clips in S.League and J2 League, they liked what they saw and invited me over for a one-week trial. A contract was signed right after.

P: How do you feel after winning your first ever ‘Player of the Month’ for February and to be amongst the top scorers of the league?
B: I feel very happy as this is my first individual award and it gives me the motivation to strive for more. It feels good to be one of the top scorers at the moment and I want to aim for the Golden Boot award this season.

P: Did playing in the S.League make it easier for you to adapt to the Malaysia Premier League?
B: Yes. Both countries’ cultures are similar, likewise for football style, so it has definitely helped me to fit into the team better.

P: What are the key differences in football between Japan, Singapore and Malaysia?
B: In Japan, it involves more running around; Singapore is more physical, especially with the hard tackles; Malaysia uses more of the pressing style of play.

P: What target(s) did you set for yourself this season?
B: I hope to gain promotion to the Super League, it would be best if we can achieve it as the champions. Winning the Malaysia FA Cup and the Golden Boot would be good as well.

P: What are your thoughts on the draw against Johor Darul Ta’zim II?
B: I feel that a draw is not good enough; whenever I score, I would want to get 3 points. It was a pity that I did not score when I had a one-to-one chance nearing the end of the match. 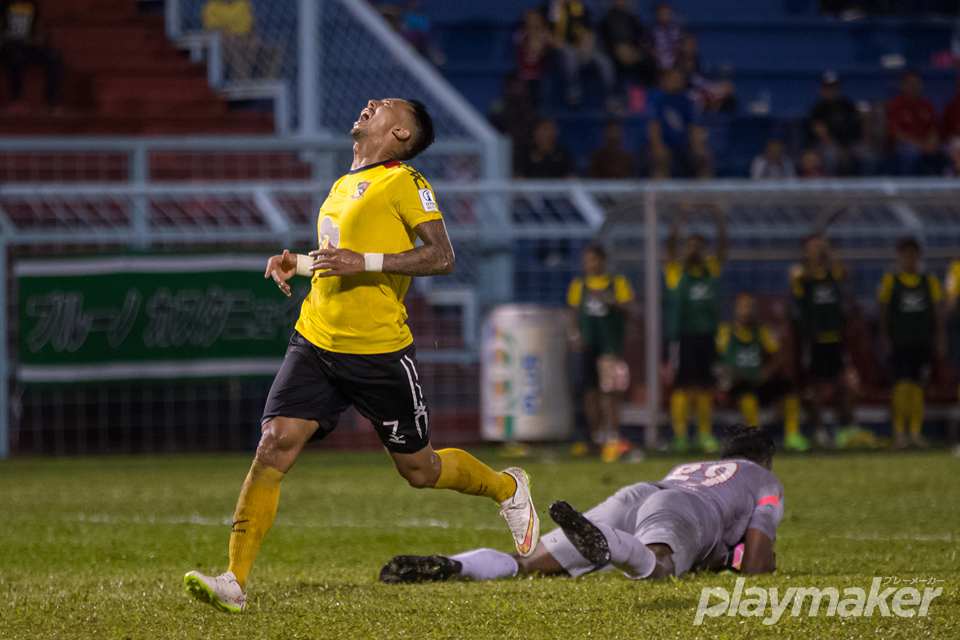 P: What do you miss about Singapore football?
B: I miss the supporters in Singapore, it is not a huge community so it is easier to recognise each and everyone. I like the close bonds where fans and players become friends. I want say a big ‘Thank You’ for their support.

P. Thank you Bruno, for your time and all the best for the rest of the season!

Negeri Sembilan FA will host Sabah FA in the 2nd leg of the Malaysia FA Cup Quarter-Finals on Friday (21st April), holding a 1-0 away lead over the Rhinos.