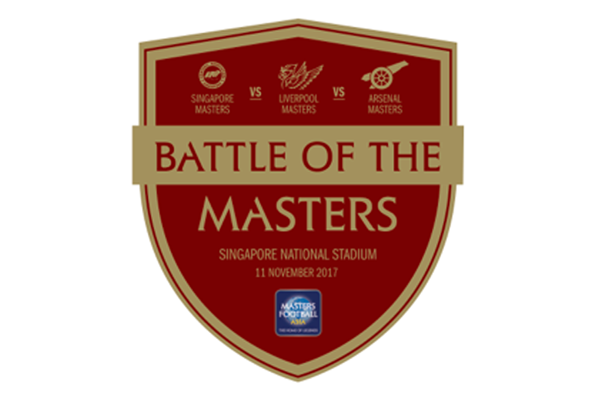 SINGAPORE, 2017, JULY 05 – Masters Football Asia is delighted to announce the addition of the Singapore Masters (over 35’s) team to the prestigious Battle of the Masters at the National Stadium in Singapore on 11 November 2017.

Already featuring the Liverpool Legends and Arsenal Legends, fans are up for more action as the tournament grows to feature three teams which will play 40-minute matches in a round-robin format.

The Singapore Masters team consist of some of the biggest names of local football such as Fandi Ahmad, V. Sundram Moorthy, Malek Awab, Aleksander Duric and more. The Singapore Masters’ last outing at a Masters Football Asia event was in 2014, when they took on the Liverpool Masters in front of a sold-out crowd at the Jalan Besar Stadium. The closely fought game served as Duric’s testimonial game and the Singapore Masters lost narrowly 3-1.

“It’s a great opportunity for all of us to come together to both relive and create new memories. We did give the players a run for their money but were unlucky at the last match back in 2014, so we’re looking forward to challenging them again!” said Aleksandar Duric.

The Singapore Masters will be backed by their official sponsor, CMC Markets. Mr Derek McGuire, Marketing Manager of CMC Markets said, “We are proud to sponsor the Singapore Masters in what promises to be a great day at the National Stadium. This event always proves popular with our top traders in Singapore, and it has gone from strength to strength in recent years. I remember Fandi, Sundram and co-teaching some of Europe’s best players a lesson at the National Stadium when Masters Football first arrived in Singapore, so I’m delighted CMC Markets can now partner our home-grown legends of the game. We will be cheering for Singapore in November.”

While this will be the first time the Liverpool Masters take on the Arsenal Masters in the Masters Football Asia series, it is not the first time they have come head to head at the National Stadium. The Reds and Gunners have met at the Singapore National Stadium way back in 1991, where Liverpool lost to Arsenal 4-3 on penalties. Steve McManaman, who returns to the Liverpool Masters side this November, was part of the Liverpool side in 1991. He is joined this November by David James, John Arne Riise and Luis Garcia against the likes of Robert Pirès, Nigel Winterburn, Gilberto Silva and Mikaël Silvestre.

“The love for football is tremendous in Singapore and even more so for a team of your own and especially one featuring several of Singapore’s biggest football stars. The roar of approval from the crowd greeting the Singapore Masters back in 2014 was unforgettable and I look forward to hearing that again and this time, in the National Stadium”, added Steve Black, Chief Executive Officer of Masters Football Asia.

Tickets for Battle of the Masters presented by Masters Football Asia are available at www.mastersfootball.com and Sports Hub Tix. Tickets start from $20, Family packages (two adults & two children below the age of 12) are available from $88.

Fans are advised to purchase tickets early so as to enjoy ticket savings and to earn the opportunity to win “money can’t buy” experiences and privileges.

From 15 June to 31 August 2017, Standard Chartered Credit/Debit Card holders will enjoy 20% off regular ticket prices. In the same period, ticket buyers can enter a contest and stand a chance to win themselves the opportunity to be an assistant manager to either of the teams. Assistant manager privileges include a spot on the team bus as the teams make their way to the National Stadium, warming up with the teams on the pitch before the game, and finally, taking their place amongst the players on the team bench. Six assistant manager roles are up for grabs and interested parties can check out both the Masters Football Asia’s Facebook and Instagram platforms for more details.

All tickets purchased before 31 August are also eligible for a contest to win an exclusive spot in the football clinic for children aged 6 – 14 years old. The one-hour football clinic will be led by the Arsenal Masters and Liverpool Masters at the National Stadium on Match Day. 50 slots are available and winners will be picked on 31 August. For more information, please visit www.mastersfootball.com.