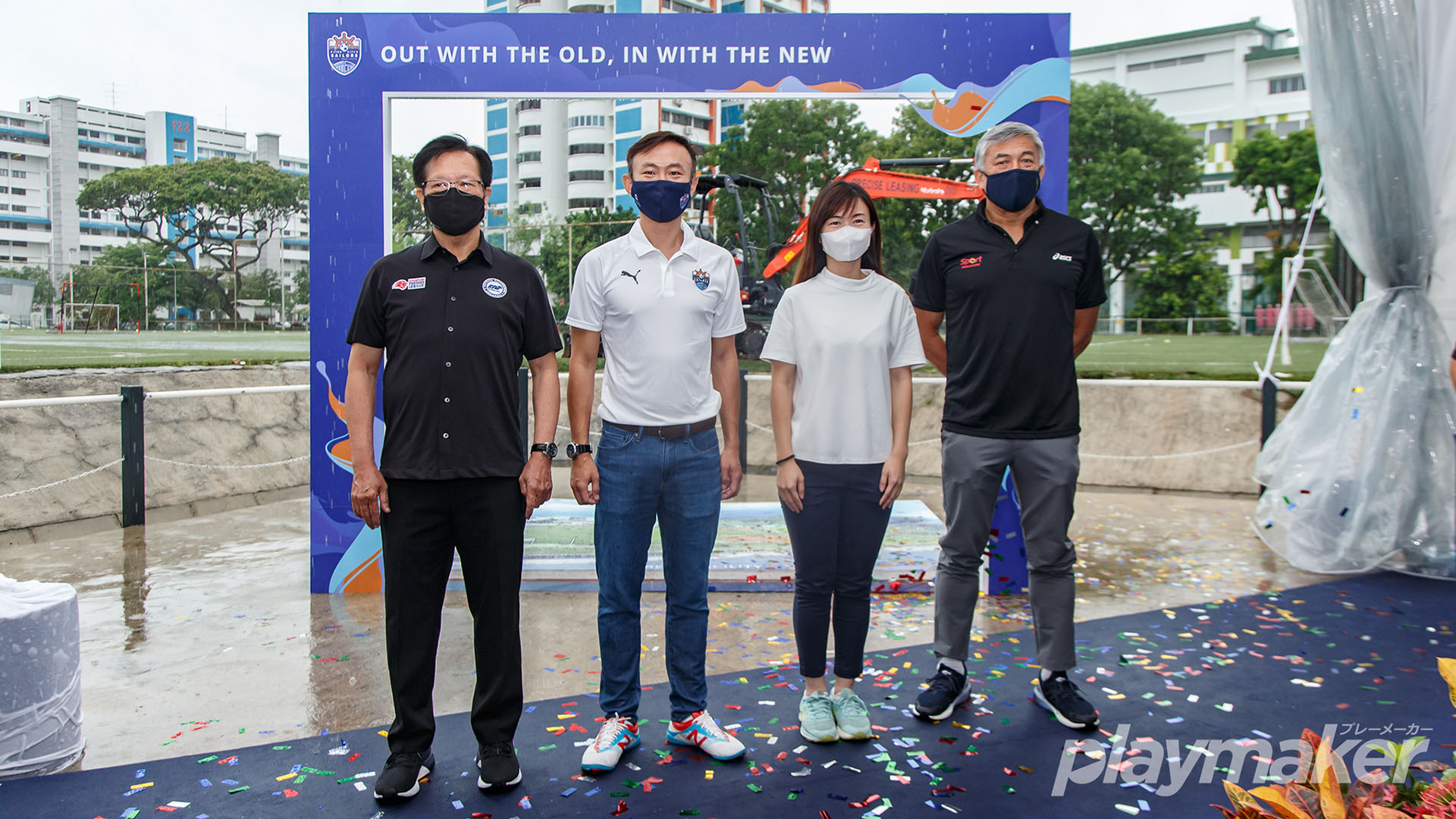 SINGAPORE, 2021, APRIL 24 – Lion City Sailors’ (LCS) new state-of-the-art training facility that will be home to both the Sailors and the LCS Football Academy hosted its groundbreaking ceremony on 24 April 2021. Construction on the proposed facility at 8 Mattar Road, which currently houses the Academy, is projected to be completed in April 2022.

A commitment to Singapore football and the community

The facility will, when completed, become Singapore’s first fully-integrated football training centre. LCS has committed to invest more than $10 million in this centre, underlining its drive for excellence and support for the development of football in Singapore. It will feature five pitches – two 11-a-side and three 7-a-side fields – changing rooms, a gym, and will include facilities for sports science and medicine, video analytics, as well as study rooms for Academy scholars in the Elite Development Programme.

The training centre is a key facet of the Sailors’ drive for excellence in the Singapore Premier League (SPL) and the region. It will also facilitate the establishment of a pipeline of young footballers for the Singapore football fraternity as it aims to boost youth development as part of the national project: “Unleash the Roar!”.

In addition to facilities that cater to the Sailors’ professional team and its Academy, the proposed facility will include a viewing area for the public, a café, as well as community-friendly spaces where grassroots activities for residents, such as health screenings, community talks, and exercises classes can be held.

These additional features come as part of the facility’s secondary goal to serve and support the residents in the community, with the aim of bringing greater vibrancy and cohesiveness to Mattar Road as an inclusive sports hub in the neighbourhood.

Sinking roots into the community

Ms Tin was excited at the prospect of the Sailors sinking roots into Mattar and embracing the community around its new home.

She said, “I am heartened by the Sailors’ commitment in providing access to the facility and organising activities for our MacPherson community. I look forward to the Sailors and LCS Football Academy working closely with our residents and community partners to cultivate aspiring MacPherson youths and local sports talents.”

An investment in Singapore football

While rooted in Mattar, the facility will play an integral role in further developing the larger Singapore football ecosystem and supporting “Unleash the Roar!”. The aims of the national project – creating opportunities for more young Singaporean boys and girls to undergo sustained and structured high-quality football training, with talent pathways for those who wish to play professionally – are perfectly aligned with the vision of the club.

“Through the Unleash the Roar! project, we look forward to partnering with more like-minded private clubs and academies to uplift Singapore football. I wish LCS great success.”

FAS President Mr Lim Kia Tong said: “We are extremely impressed with the uncompromising approach to excellence that LCS is bringing to Singapore football as well as the club’s drive for youth development which can help push the sport to greater heights. It is also extremely commendable of them to embrace the community, especially the Mattar Road residents, as we embark together on Singapore’s aspirational journey for football excellence by 2034.

“We are proud to have the LCS Football Academy as Singapore’s first AFC One-star academy, and we are looking forward to the club setting high local and international standards with this facility. The FAS congratulates LCS on the start of this exciting project and marking a memorable chapter in the club’s history.”

Fueling a vision of excellence and professionalism

The Mattar Road facility is a manifestation of the Sailors’ vision of excellence: A successful professional football club that is home to an elite youth development hub that drives the Singapore football fraternity. This includes putting in place a structured ecosystem streamlining the operations of LCS Football Academy and the club proper, as well as implementing a pathway for young grassroots footballers all the way through to the elite senior squad.

The new facility will go some way in driving a professional youth development system at the Academy. Its classrooms will ensure a conducive environment for LCS scholars to study in between training sessions, while briefing rooms provide for ideal conditions for off-the-pitch work that includes video analysis sessions. Exclusive changing rooms for scholars will provide a safe space for team bonds to be developed.

Pitches that will be installed at the facility are FIFA-certified and will aid in preventing injury in both young footballers and elite players as they are put through their paces by staff who will also witness significant improvements.

The current Mattar Road facility has enough space for only 10 staff, while the new venue will be able to comfortably accommodate up to 60. This will aid the acceleration of the Sailors’ professionalisation drive as it grows its team to include specialised staff that include sports scientists and kinesiologists. These hires will, in turn, drive the technical education of local coaches while also taking Academy scholars’ training to the next level.

Chew Chun-Liang, CEO of Lion City Sailors said, “Mattar Road will become the new home of the Sailors, where our young talents hone their craft, and elite seniors drive to win trophies, and I’m also excited about opening our doors to the football community programmes through ActiveSG efforts.”

He added: “This facility is aimed at driving not just LCS efforts in youth development and on-field success, but also to help lift the football community in our country. We’re determined to make sure this project not only gets off the ground but can fly.”