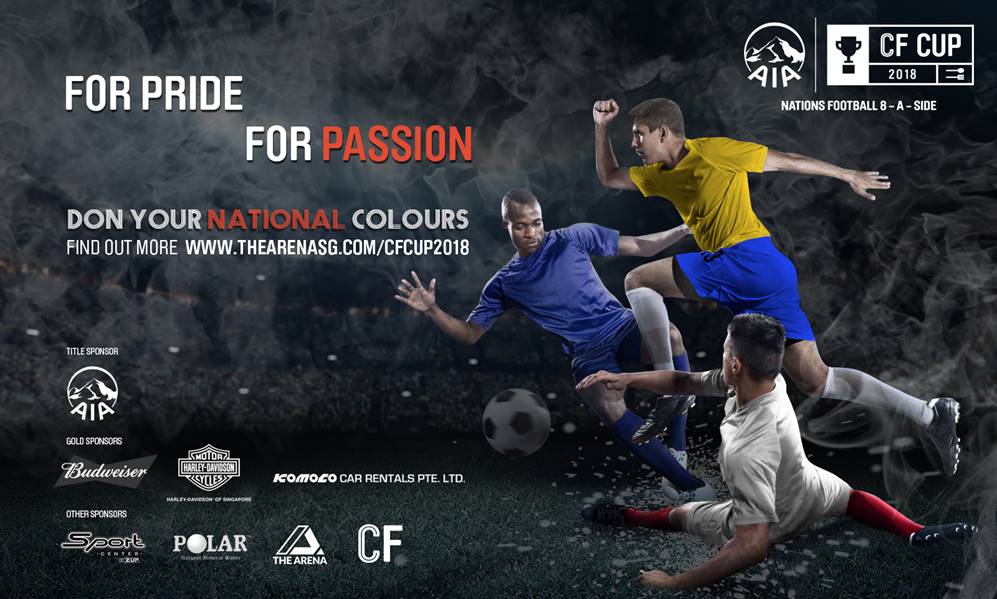 SINGAPORE, 2018, APRIL 04 – Football fans in Singapore can now stand a chance to represent a nation to play in the AIA CF Nations Cup 2018 in May. The 8-a-side tournament, brought together by AIA and Cafe Football, is a special sequel to Cafe Football’s inaugural CF CUP in 2017.

CF Cup 2017 was part of the grand opening of Cafe Football and The Arena last year. 2018’s version sees a special twist added to the mix. With this being the year of the FIFA World Cup, AIA CF Nations Cup 2018 will act as Singapore’s very own version of the summer extravaganza where participating teams will get to choose a nation and don their colours for this competition.

The tournament is open to amateur players only. Interested participants are to form a team of eight players and register at www.thearenasg.com/cfcup2018. Round Robin games will take place on 27 May and 3 June. The knockout stages will then commence on 17 June which will culminate in the top two teams facing-off for the grand prize of $7,000.

The Arena is a stylish sports park in Singapore with one 11-a-side pitch, two 7- a-side pitches and three 5-a-side pitches. These pitches are installed with FIFA Quality Pro Ultrasport™ 60mm artificial grass that is considered the most durable product in the market with 16,000 Dtex duotone monofilaments. The yarn successfully combines softness and durability. Highly recommended by the top clubs in Europe for its performance and durability, The Arena is the first and only facility in Singapore using such quality turf.

Aside from football pitches, the sports park also offers a wide variety of other fitness facilities for all ages such as Muay Thai, Aerial Yoga, Barre, Rock Climbing, Augmented Wall, Bungee Workout, Jiujitsu and Functional Fitness as alternatives to football – making it the perfect location for families to engage in fun fitness activities together over the weekends and school holidays.

The inclusion of a full-fledged restaurant Cafe Football Singapore in The Arena completes the experience, allowing fitness enthusiasts of all ages to come together and enjoy a scrumptious meal after a workout or two. The football- themed restaurant, which is owned by Rowsley Ltd jointly with Manchester United legends Gary Neville and Ryan Giggs, was first established in the UK. The Singapore outlet is the first franchise in Asia. A unique restaurant that feeds a love for food and football, customers will appreciate a diverse, well-rounded menu with some subtle nods to the beautiful game.

1) Assemble your finest team of 8 players, with up to 4 reserves. Ensure all your team members are non-professional and non-international players. If they were, they must not have played professionally or represented an international team in the past 5 years, from 2013.

2) Register your team via www.thearenasg.com/cfcup2018.
3) An email will be sent to you to acknowledge your application with payment

details. Registration is valid only upon receipt of payment.

4) Complete your Team Sheet, Letter of Waiver & Indemnity for every player (to be furnished by organiser) and submit to events@thearenasg.com before Qualifiers.

For more information of the tournament, please visit: www.thearenasg.com/cfcup2018